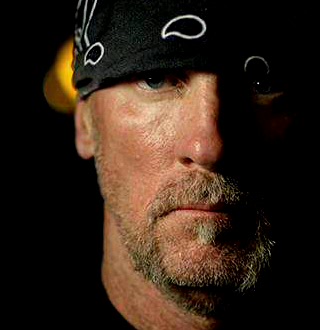 Before becoming a federal law enforcement agent, Jay was a standout athlete at the University of Arizona where he played football. He became an All-Pacific-10 conference wide receiver, College Football All-American Candidate at Wide Receiver and was named to Arizona Wildcats “All-Century” football team. In 2012, Dobyns was named the “#1 Badass Arizona football player in history” by the Tucson Citizen newspaper. Dobyns graduated with a bachelor’s degree in Public Administration. After college, he played briefly in the Canadian Football League and the United States Football League.

“In the 35-year history of The City Club of San Diego and more than 1,000 lecturers, we’ve not had a more compelling speaker than Jay Dobyns. There’s a dark side in America where people’s lives are ruined by drugs and violence. Jay Dobyns, in dramatic fashion, reveals that world and the threat it poses. He lived it as an undercover agent and the story he tells is unforgettable.”

Jay is perhaps best known for his landmark efforts to infiltrate the notorious Hells Angels Motorcycle gang. Over a two-year period, he was the first-ever law enforcement officer to defeat the gang’s multi-layered security measures to become a member of their legendary Skull Valley charter. Jay’s recounts this operation in his New York Times and international best selling book; No Angel: My Harrowing Undercover Journey to the Inner Circle of the Hells Angels

,” chronicles his life and career.

“Jay Dobyns brought down the house with an incredible speech at our client summit. There was not a dry eye in the house by the time he was finished. I know because I was there. Huge thumbs-up.”

He is a law enforcement trainer, a consultant to the film and television industry, and a high school football coach.

“Jay shined during his discussion at the Red Bull Human Potential symposium speaking of transcending the limits of human achievement and overcoming risk.”

“He is not your ordinary dynamic speaker. A rare combination of grizzled lawman, yet compassionate and very human. Not many audiences are tougher than an NFL team, but Jay had the Cardinals hanging on his every word.”

“I asked Jay to speak to my executive staff. His presentation was heartfelt, humorous, tear-jerking, entertaining and inspiring.”

“Mr. Dobyns traveled to New Zealand and provided the keynote address at a symposium I helped coordinate. He spoke with the oratory skills similar to that of former Secretary of State, Colin Powell, while delivering a message that was meaningful and intelligent.”

“I’ve known Jay many, many years. As a friend, he is special; as an agent and fellow “operator,” there is none better; as a wounded operator and my patient, his toughness and professionalism were inspiring. As a public servant, few have demonstrated his dedication and repeated heroism. The nation and our communities are safer because of his selfless sacrifices.”