Balance for Better, the theme of International Women’s Day (IWD)

on March 8, 2019, is about building a gender-balanced world, every day, everywhere…together.

We each have been given the gift of life. Every single person on this planet has a part to play in it, every day, everywhere, together.

Not only have I had the honor to make an impact as a woman leader, I also have had the great honor to have served and worked with other amazing women leaders and role models.  In my book about extraordinary military women, Changing the Rules of Engagement, Inspiring Stories of Courage and Leadership from Women in the Military, I highlight several women who shared with me their personal stories of how they took their incredible gifts, changed the rules, and how they engaged to play their part and exceeded their dreams.

Nicole Malachowski, the first female Thunderbird pilot and Pam Melroy, one of only three women in the NASA Space Shuttle program to fly and command a space shuttle, were driven by their childhood dreams. They wanted to achieve what was prohibited based on their sex. They wanted to go beyond what women were allowed by law and policy to achieve. Nicole’s dream, to fly a US military fighter jet, and Pam’s, to go into space, were realized because of the part they played.

How? Nicole Malachowski said she had a team of supporters and pursued her goals to the best of her abilities. “It boils down to this,” she explained, “Always surround yourself with positive people. They need to be people who believe in your dreams as much as you do. If they don’t, you wish them well.” She added, “You never act out of anger. You wish them well, and you go forward with the people who believe in you, and you keep that team.”

Pam Melroy studied at Wellesley College and said, of that time in history, “The idea women weren’t good scientists or just couldn’t do science was ludicrous to me.”

She knew to get to space she had to be a military pilot and joined the US Air Force, taking a step closer to space flight. She also became a graduate student at MIT, earning a master of science degree in earth and planetary sciences. As an Air Force pilot, she learned a lot about leadership and the military culture, how different people would react to different things.

“It was tough being a woman. Your credibility was not very high. You had to prove yourself all the time,” said Pam.

Pam chose to fly and go to space when military jet pilot training was prohibited for women. By 1993, when women were allowed to fly as fighter pilots, Pam had been flying the KC-10 for years.

The next big leap for women and men is a gender-balanced world.  Everyone has a part to play, everywhere, even in space, all the time…together.

When the workplace or environment is not balanced, we notice it. We feel it. We begin to tilt towards unfair practices and policies. We tend to exclude. Diversity is not celebrated. New ideas and ways do not flourish or take flight. Change for good, falters.

As a result, the part we each have been given in this life is diminished or taken away, not permitted to be played, learned, experienced.

Gender balance creates a better world at home, at work, in our schools and communities, and in our lives.

International Women’s Day, a focal point for the women’s rights movement, has evolved since 1911 when over one million people came together, collectively, to build awareness for a balanced world. This global day celebrates the social, economic, cultural and political achievements of women AND marks a call to action for accelerating a gender balance.

#BalanceforBetter is a year-long goal.

If it were just for a day, would change happen?

Would Pam Melroy have become an astronaut and would Nicole Malachowski become a Thunderbird pilot if the laws prohibiting them, on the basis of sex, were not changed?

Just like Pam and Nicole, go after it and then, dream bigger.

We each have been given the gift of life. Let’s help everyone achieve their fullest potential; to achieve the highest level they can, every day, everywhere.

Let’s do this together. 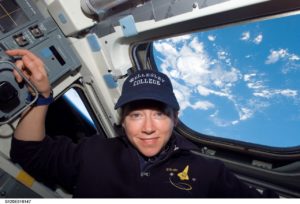