Former Major of the Oklahoma City Fire Department and 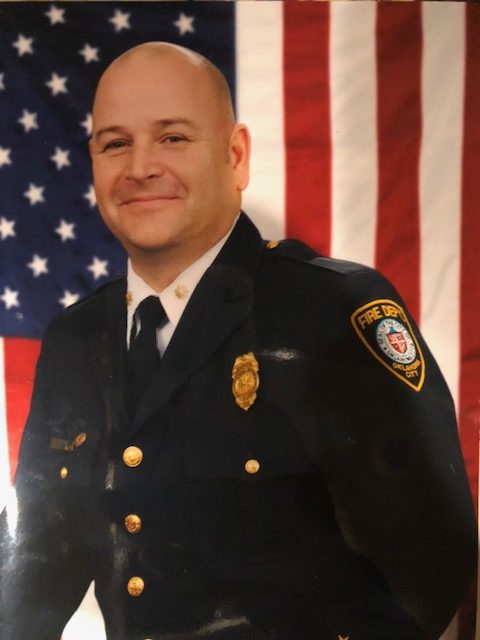 Chris Fields is a former member of the Oklahoma City Fire Department. Chris joined the fire department on July 12, 1985, promoting through the ranks and retiring as a Major March 1, 2017, serving the citizens of Oklahoma City for 31yrs and 7 months. Chris was captured in a photo that became an iconic symbol of the Oklahoma City Bombing in 1995 when he was cradling the body of 1yr old Baylee Almon. Chris has now dedicated his life and travels to speak to other 1st responders. He discusses the brutal realities of a life spent responding to citizens in their darkest hours. He routinely places others before himself and represents the greater good in all of us. Chris tells the story of his life, his 31yrs of public service, and how that day in 1995 all combined to take a toll on his life and his family. He suffered in silence for many years. Now he shares how with God, Faith, and Family he took control and his journey out of the suffering in hopes of helping others avoid the failure, the pitfalls, and to encourage them to reach out.

“I was shocked when I reached out, how many people were reaching back. I want 1st responders to know it’s ok, to not be ok sometimes. It’s all about changing the narrative and breaking the stigma of reaching out for help. As heroic a calling as our profession seems to many, to me it’s just as heroic if not more to speak up and reach out. Be a hero to yourself and your family.”

“After 31 years as a Firefighter, Chris Fields retired and began the next chapter of his life. The University of Colorado Colorado Springs was fortunate to be included in Chris’s next chapter. Chris exposes the audience to a raw telling of his life as a Firefighter. His experiences, professional and personal, remind us to search for the silver linings in every situation. After hearing from Chris Fields, you cannot help but feel inspired and motivated!”

“Chris Fields gives a “no holds barred” testimony of both his personal and professional life as a firefighter.  Those of us in the profession know that these are one in the same. I intently watched the faces of the firefighters in the room (roughly 200) and I realized that for many of them what they heard and witnessed from Chris was more than just a story, rather, it was a large mirror placed in front of them revealing a reflection of themselves.  Simply put Chris’s experience was, is and always will be, “PURPOSE DRIVEN!”

“Chris Fields embodies the person we should all strive to be as 1st Responders. Dedicated to mission. Sacrificing for the greater good. Bravery under fire. Compassion for those he serves. When you hear his story – the successes and the failures told with transparent courage – you will be amazed and inspired.”

“Chris has a message that any 1st responder, military, or anyone with a HEART should hear. His message is about helping others and changing the narrative in how Post Traumatic Stress is dealt with. I have served in the military for over 22 years and I recognize a servant leader and Chris is that leader.

In short, Chris’s experience as a firefighter along with his skills and abilities, make him the perfect choice for any speaking engagement. He possesses the required traits and intangibles you are looking for to mentor, lead, and build superior future leaders. In addition, he possesses the highest levels of confidence, humility, maturity, and sound judgement; all of the qualities you look for in a motivational speaker.”

Podcast: Behind the Shield